A brief overview of Benchrest Shooting and its history

Benchrest shooting is a shooting sport discipline in which high-precision rifles are rested on a table or bench — rather than being carried in the shooter's hands — while shooting at paper or steel targets, hence the name "benchrest". Both the forearm and buttstock of such a rifle are usually fully supported by bean bags, a bipod/monopod (front/rear) combination, and/or a specially designed fixture device called shooting rest (which may be one- or two-piece depending on competition rules), so that the gun can remain stably pointing at the target without needing to be held by someone. When shooting, the shooter simply sits/stands comfortably behind the table/bench, operates the action and pulls the trigger, without needing to worry about carrying any weight of the gun. This is in contrast to other shooting disciplines, where the shooter has to bear at least part of the gun's weight while holding it steady to aim, even when using support devices such as bipods, tripods or shooting sticks.

Shooting guns from stable benchrests may also provide a stable platform for sighting in less specialized firearms, including even handguns, shotguns and muzzleloaders, as it eliminates most of the human errors that can confound the sighting-in process. 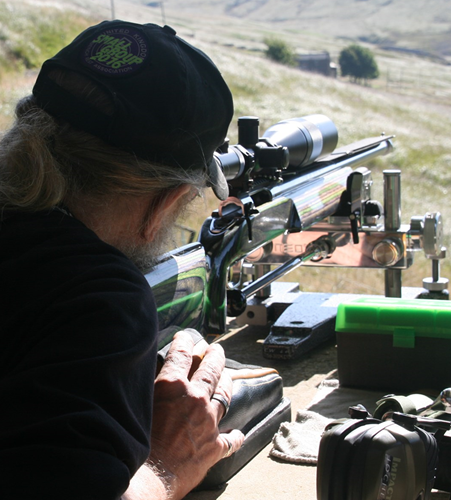 Benchrest shooters are notoriously detail-oriented and constantly trying to further the accuracy potential of the rifle through experimentation. Nearly all benchrest rifles are custom-made and many shooters do their own gunsmithing. Nearly all shooters in centerfire competition handload their ammunition in order to tune it perfectly to their rifle. In contrast, handloading ammunition is strictly prohibited by the rules for rimfire benchrest competitions.

The post-Civil War era "double rest" rifles were one early form of "benchrest" rifles. The World Benchrest Shooting Federation (WBSF) is the main international governing body for benchrest shooting, and encompass both fullbore and smallbore competitions.

Modern Benchrest shooting grew from varmint hunting, where the shooters would aim for highly accurate rifles, using mostly .22 caliber cartridges. Initially, competitors could use just about any gun they wished. Eventually, classes of guns were created to enhance the sport's competitiveness.